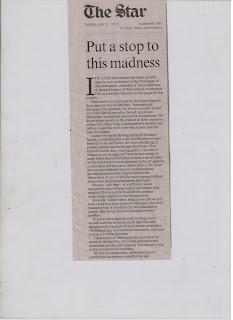 Lesbian says she was attacked over kiss 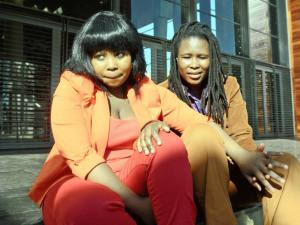 Khanyisa Ndoda, left, and Bonisiwe Mtshali talk of their harrowing ordeal after being attacked by security guards at the Carlton Centre in Joburg. Picture: Antoine de Ras

A local lesbian is standing her ground after allegedly being assaulted by a group of security guards at the Carlton Centre, allegedly because of her sexual orientation.

The attack comes after a Kuruman man was beheaded last month for being gay and at a time when crimes against the lesbian, gay, bisexual, transgender and intersex (LGBTI) community are increasing.

Bonisiwe Mtshali, 29, who works at the Carlton Centre in the Joburg CBD, was beaten to the point of unconsciousness after kissing her girlfriend goodbye on June 13.

“I accompany her to work every morning,” said Khanyisa Ndoda, 21. “And every morning I give her a goodbye kiss.

“But as we kissed that day, we heard these guys saying ‘Some people will never reach heaven’ and shouting ‘Voertsek’.”

Mtshali confronted the three men, who were security guards from Hlanganani Protection Services, the contracted security provider of the Carlton Centre.

“I asked ‘What did we do wrong? Why are you talking to us like that?” she said. “Then they started pulling my hair and beating me.”

For the minutes that followed she was kicked, hit and pushed to the ground. Ndoda watched horrified: “I was traumatised, I didn’t know what to do.”

Though the shopping centre was crowded, nobody stepped in to stop the assault.

“Then they took her (Mtshali) outside, onto the pavement,” alleged Ndoda.

“One of the guys said they couldn’t do everything they wanted to do inside the mall because there were cameras.”

She pleaded for her girlfriend to be left alone, saying that if they had done something wrong, they just be detained or fined.

The couple were taken to the security offices.

“They were so rude,” said Ndoda. “They said (Mtshali) acted like she was a man, that the mall was not the place to kiss my girlfriend, that we should get a room.”

As the security guards berated the pair - “two girls kissing was public indecency”, they were allegedly told, “like urinating in the street” - Mtshali collapsed and began foaming at the mouth.

The guards refused to let Ndoda or their friends take her to hospital and it was allegedly an hour before they called an ambulance. Mtshali regained consciousness three hours later.

When they went to the Johannesburg Central police station,

“the police advised us to drop the charges,” said Ndoda, as “it wasn’t a big case and would be expensive”.

Meanwhile, Mtshali has been threatened with counter-charges by Hlanganani - she scratched one of the men while defending herself. But she’s sticking to her guns.

Two of her alleged attackers will appear in court next week.

LGBTI rights group Forum for the Empowerment of Women (Few) is helping Mtshali with her legal fees - but says it’s just one attack in a rising trend.

“In the past few months there have been about eight to 10 murders across the country,” said Few programmes co-ordinator Phindi Malaza.

A government task team was created last year to investigate hate crimes against LGBTI individuals, but with no results.

Two NGOs have since pulled out of the team because of a lack of progress.

In May, the Congress of Traditional Leaders of South Africa called for the removal of LGBTI rights from the constitution and for the Civil Union Act, which legalised same-sex marriages, to be scrapped.

Malaza thinks the recent attacks are directly linked to this.

Ndoda saw the attack as their chance to act. “At the end of the day, our voices must be heard. We must be respected for who we are,” she said.

Some attacks against the lesbian community:

2012: Hendrietta Thapelo Morifi is found dead in her Limpopo home, stabbed in the neck with a fork, her throat slit. In the same month, Soweto resident Sanna Supa and Khayelitsha resident Phumeza Nkolonzi are shot and killed.

2008: Banyana Banyana footballer Eudy Simelane is gang-raped, beaten and stabbed 25 times in Kwa-Thema. One of her attackers is serving 32 years in jail.

2007: Sizakele Sigasa and Salome Masooa are raped, tortured and killed in Soweto. The case has been closed.

2006: Zoliswa Nkonyana is murdered by a mob of men in Khayelitsha. Nine men are arrested and charged. The trial was postponed more than 40 times before judgment last October. - The Star